The Cave Research Foundation is a private, non-profit organization dedicated to:


The quarterly CRF Newsletter documents current activities in all operations area.  It is distributed, either in print or electronically, to over 700 CRF members, government agencies, and other interested parties.  PDF versions of the current CRF Newsletter can be downloaded from these links: high resolution or low resolution.


CRF accepts proposals for graduate student research in cave and karst studies leading to either a master's or doctoral degree. Proposals may be in any field of the earth, natural, or social sciences as long as the research addresses topics related to caves or karst.  Click here for information about CRF's Graduate Research Grant Program.

The Cave Research Foundation has been a supporter of the need for and implementation of efforts by federal, state, and local agencies to slow the spread of White Nose Syndrome (WNS), the fungus that is killing many hibernating bats.  CRF will continue to work with said agencies to accomplish that end until the spread reaches its natural conclusion. More information about WNS information is available on the National Speleological Society's Web site here.

CRF remains committed to supporting the agencies as they endeavor to protect species survivors to ensure a species is not lost forever.  The Foundation, in cooperation with the U.S. Forest Service, has produced a 20-minute video documenting the approved procedure for decontaminating clothing and gear used in caves in WNS-positive area.  The video can be viewed on YouTube here.

CRF's Publishing Affiliate is Cave Books.  For a list of reviews and books published by Cave Books visit http://www.cavebooks.com/

CRF's Hamilton Valley Facility, located just outside of Mammoth Cave National Park in south central Kentucky, is now open for CRF use and for those individuals/organizations involved in relevant karst or cave research, conservation and education. Click here for information on availability and use of Hamilton Valley.

The main Hamilton Valley building has a fully equipped kitchen, including cooking equipment and tableware. The great hall is quite large.  There are also two restrooms, each with two showers.  There are two bunk houses next to the main building, each with five rooms, four bunks each. Total sleeping capacity is 40. All the buildings are heated and air conditioned. 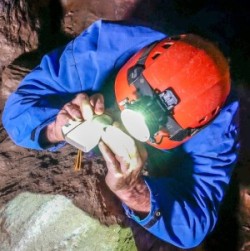 Much of CRF's work involves surveying caves and producing accurate cave maps.  These maps, along with inventory information gathered during the mapping process, allow cave owners and managers to know the nature and extent of their caves and what geological, biological, and historical resources they contain.  This information is crucial to managing and protecting the fragile underground world.

Cave surveying, and caving in general, is undergoing a technological revolution.  CRF member Derek Bristol has created has created a Web site with information and instructional videos for several aspects of caving, including cave surverying and mapping, vertical caving techniques, and cave photography.  His Web site is www.derekbristol.com and is well worth checking out.


For general questions about the Foundation and its activities click here to send a message to the CRF President, Dave West.

Donations to support the Foundation's activities are welcome.  CRF is a 501(c)(3) corporation incorporated in Kentucky.  All donations are tax deductible as allowed by law.

Donations can be made by check, credit card, or from a PayPal account.  Checks should be sent to the Treasurer at the address below.  Credit card and PayPal payments can be made on PayPal's secure Web site.  Click here for more information.